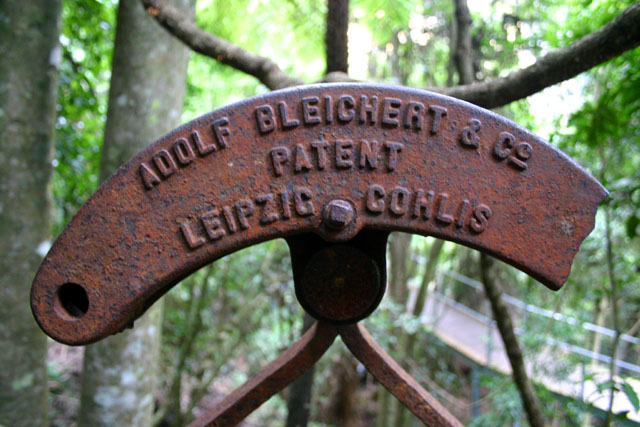 Adolf Bleichert & Co. was a famous German engineering company from Lipsia (Saxony),  which very soon became the world’s leading cable car and ropeway constructions enterprise, both for material cable cars as well as for person transportation ropeways and, although nowadays it doesent exist anymore as a company, it is still considered, from a historic industrial point of view, to be the founder of the modern cable way system and inventor and deliverer of the most important wire ropeways throughout the world. More than 5.000 wire ropeways have been ordered, built and delivered to many countries during the existance  and growth of Bleichert company, starting from it beginning in 1874 until 1994, passing through many decades of history.

It was founded in 1874 by Adolf Bleichert and began to build bicable aerial tramways for mining in the Ruhr. With important patents, and dozens of working systems in Europe, Bleichert dominated the industry.

One in 1905 realized aerial tramway in Chilecito Argentina is considered a masterpiece. The „Cablecarril“ is long approximately about 35 km and klimbes up to 4.600 m.a.s.l. starting from a small town Chilecito located in province La Rioja northern part  of Argentina at the bottom of Andes Mountains at 1.075  m.a.s.l. , that’s more than 3.525 meters altitude difference. Today it has become a National Monument of Argentina, a heritage site and a touristic place to visit. Bleichert built hundreds of material transportation systems in many European countries, but also in eastern Europe as Czechoslovakia and even Russia, Africa or China.

This review has been developed and  written by Professor Dr.Ing. G.W. Koehler from Polytechnic Institute Darmstadt and was published on 1st July 1924.

The title of this book is: (english translation)

RETROSPECT AND REVIEW AT THE OCCASION OF ITS 50TH ANNIVERSARY ON JULY 1, 1924

The original version has been written of course in German language. Some printed samples of this book including many images still exist and are held by Bleichert family members and historian or collectors as well.

Hereafter is the copy of the original document – nobilty certificate – concerning the family tree of Max von Bleichert  (LINIE I) and his descendants which still belongs to this von Bleichert family line and is kept safe by a family member on behalf of all the other living von Bleichert’s of their ancestor. 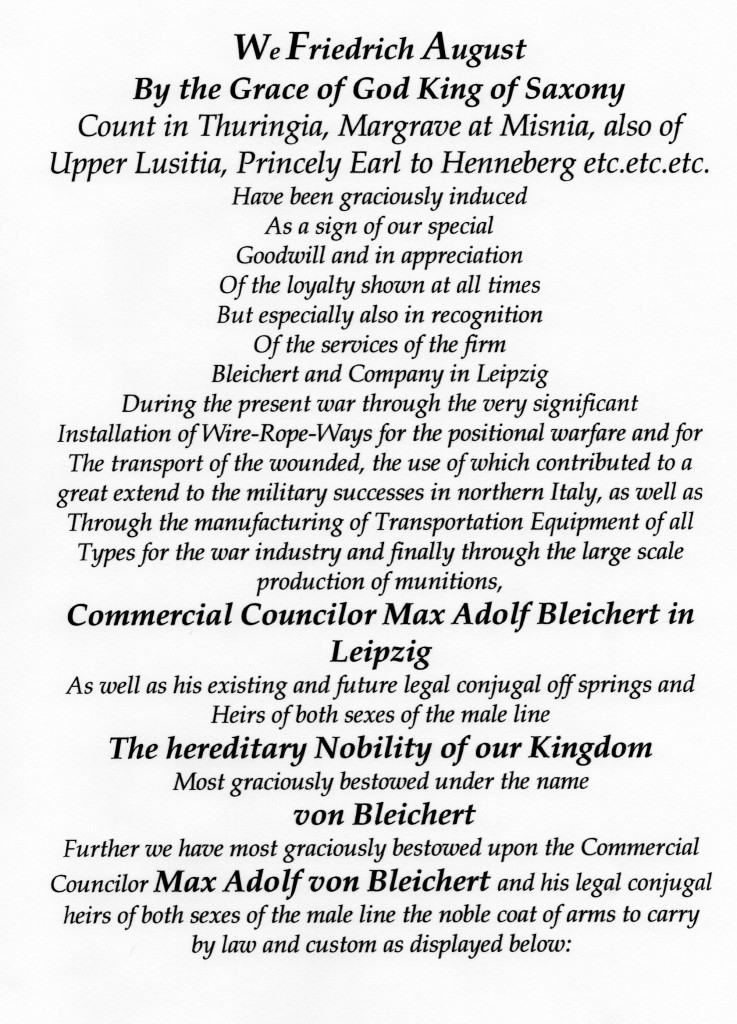 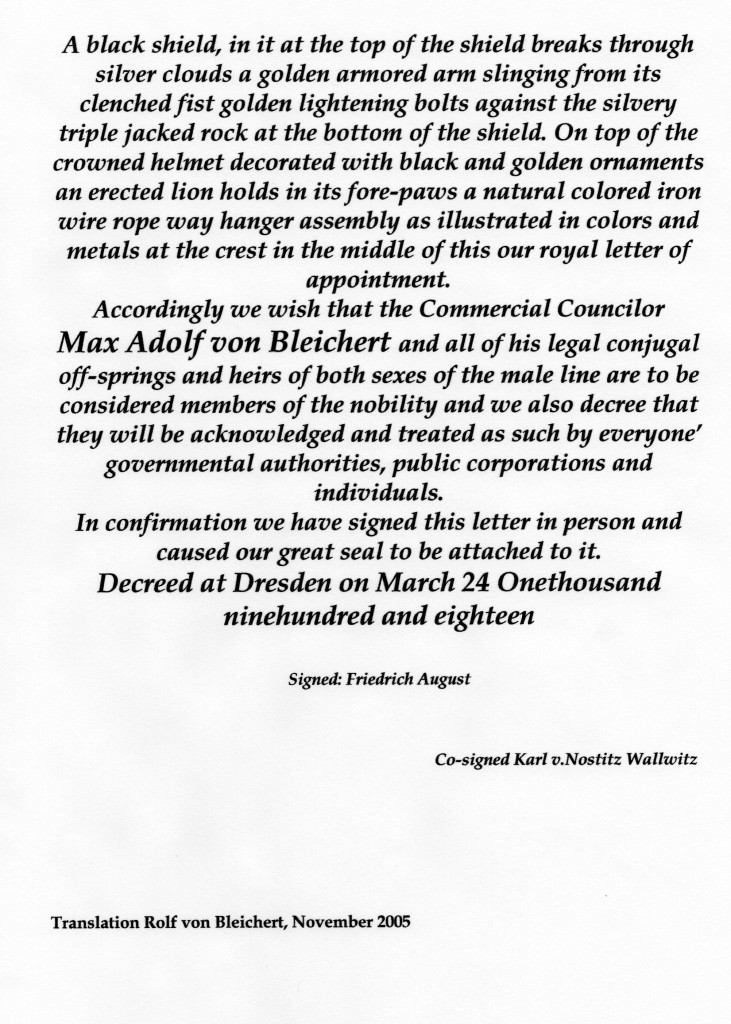 This english catalogue  „Bleichert Aerial Ropeways for Passenger Traffic“ was printed by Bleichert Transportanlagen GmbH in 1933 and doubtless destinated to the international, English speaking market. It contains a summary of the Bleichert passenger aerial ropeways built until 1933. 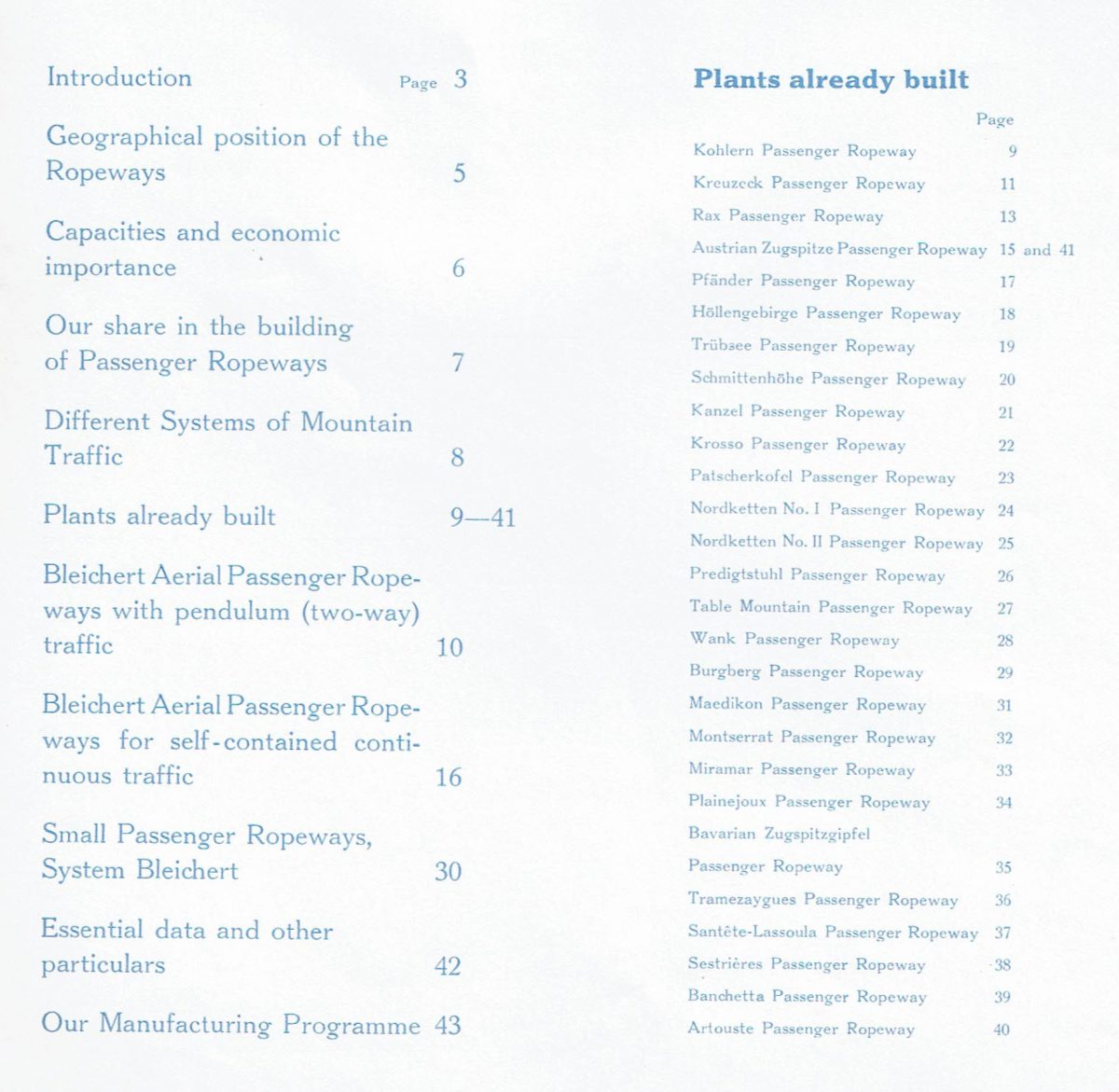 The English wording catalogue from 1933 consisting in 43 pages including n.27 passengers aerial ropeways images is hereafter attached as a PDF – document :